The Silver Scrolls Reveal Even More

When I received the invitation from Dr. James Tabor Head of Religious Studies at the University of Carolina, Charlotte to attend a presentation about “The Oldest Biblical Text Ever Discovered,” I have to admit that I didn’t connect the dots. I was so busy finishing the Road to Reformation television series that I simply didn’t take time to read the details of the email. Sound familiar? 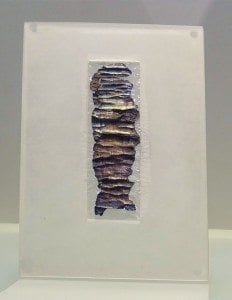 One of two silver scrolls on display at the Israel Museum, Jerusalem

On the day of the event I received a message from an Israeli Facebook friend asking me if I planned to go hear Gabriel Barkay in Charlotte. Then it hit me! This is the famous Israeli archeologist who discovered the silver scrolls containing the oldest written evidence of God’s name. I changed my schedule and made a beeline to the University of North Carolina and settled in for an evening full of surprises.

It was amazing to listen to this famed archeologist talk about his many archeological discoveries, knowing that I had actually seen some of these important places with my own two eyes. It was humbling to listen to him tell the story about how he had come into possession of these two silver witnesses that took three years to figure out how to unroll and to know that I had included his story in the pages of my book His Hallowed Name Revealed Again. It was surprising to hear that in the last 10 years or so the scrolls, as a result of new technology, have revealed a number of parallel biblical texts alluded to within the paraphrased version of the priestly benediction! What? How did I miss this powerful piece of information? Here is an article that gives more detail on the new discovery of the parallel passages.

…the scrolls have revealed a number of parallel biblical texts alluded to within the paraphrased version of the priestly benediction!

Dr. Barkay then went on to explain that these silver scrolls dated to the time of King Josiah and Jeremiah the prophet.

I left the lecture happy, humbled and surprised, after spending time listening to a man who has spent most of his life studying the Land and the Scriptures that I desire to know on an even deeper level. This is ultimately why I ventured to see that special place of discovery for myself!